"digitizing" my Digital Video Casettes is a pain. 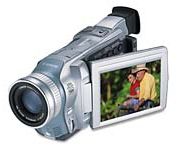 I am trying to retire / sell my Digital Video Camcorder. It uses the cute Mini DV Tapes that hold 60 minutes of video in the better quality mode. Shouldn't this be easy since they are already in a Digital format? Unfortunately, no.

The Camcorder...
The video quality on my particular Camcorder, the Canon Optura 20, is pretty good, although limited by the well known limitations of the format, notably the low resolution and the interlaced video. I have stopped using the camera because it is bulky, and the video quality of a simple pocket-sized Digital Camera is almost as good. (Plusses: Progressive Video, no hassle importing the video. Minuses: less saturated video, much lesser zoom, poorer low-light handling.)

The Project...
All I want to do is bring all of the videos I've recorded using DV Casettes into the PC in their native format. 13gb/hour is a nuisance, but I don't want to import it again. I want each video clip to be a separate file. I want each file to have a filename/datestamp that matches the datestamp on the DV Tape.

This, should be easy, right?

The contenders...
First, I just plugged in my camcorder and used Windows Live Photo Gallery (Beta) which is the default handler for this format. It promises to import each clip as a separate file. It is free, It works most of the time, but it doesn't work all that well. In numerous situations, the first frame of the video is garbage. In other situations, it fails to break the video in some places, but correctly breaks the video in other places.

Frustrated, I went to the web. There is tons of information about DV, Digitizing old VHS tapes and many other related topics, but it is difficult to find a single useful source for this topic. I finally (re)found an application called ScenalyzerLive 4.0. I used an older version fo this application many years ago, but it didn't work on vista. This latest version is working like a champ thus far. Each clip is a separate file, and the first/last frame of each clip is not garbage.

Digitizing VHS?
Once I get all of these DV Tapes into the PC, I will look into digitizing VHS content. What I've learned thus far suggests that the best results come from a very high quality VCR coupled with a dedicated Analog>Digital converter such as the Canopus AVDC55 or better. This will save more annoyingly large DV formatted AVI's to your hard drive. I can later re-encode the video to MPEG2 for DVD's, or WMV for sharing online. (Many DV Camcorders, including mine can convert analog to digital. Unfortunately, the AV Conversion is not supposed to be as good as with the dedicated AV Devices. Maybe I can get a used one inexpensively.)