The Facts: 12'10.5" across. A queen bed is 5' wide. I think the lights should be about .75' away from the edge of the bed. I think it would be worthwhile to put a switch on both sides of the bed for each of the respective lights.

The Problem: My bed is centered on the wall. I think it looks pretty good that way. Unfortunately, the light switch for the light above the bed is too far to reach from the edge of the bed. Likewise, the light designed to cover the bed area was 1) too low (I hit my head and broke a bulb) and 2) not centerd on the bed. 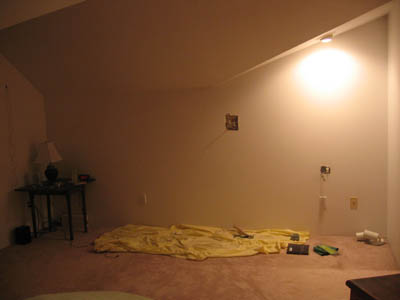 As it stands right now. 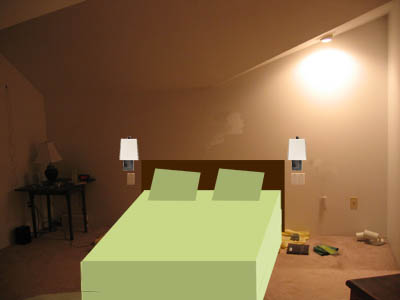 Mockup showing the Duncan Wall Sconce (150$ each from Crate and Barrel.) 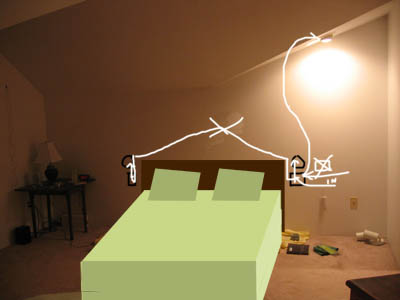 A Note: I may not need to wire a switch for the wall-mounted lamps because they will likely have a switch of their own. If I were smart I would buy the lights before deciding on the switches.

Distributing audio around the house

One of my long-term goals for the house was to be able to distibute media content around the house. In particular, I wanted to be able to play music throughout the house at once; especially in light of all the time I've been spending at home painting, wiring or fixing things.

I knew that the house had a pair of speaker wires going up to holes built into the closets of the guest room. These holes were meant to aim speakers down into the living room below.

What I didn't realize was the fact that two additional wires were run from the same junction box in the living room. These two wires conveniently run all the way to the master bedroom, with a speaker wire ending on both sides of the sliding glass door. Unfortunately, the wires are of an absurdly low gague for speaker use, but very fortunately, there are 6 wires in each bundle instead of the normal 2 wires.

I plan to control the volume and what is playing in the bedroom/porch by acquiring a RF-based IR Transmitter. I have not looked into these devices for range information or cost, but I know they exist.

Wall-mounted speaker outlets will give a professional look to the livingroom.

On the livingroom side, I have found out what wall plates I will need to give the job a professional look. These Speaker Jacks fit inside the same decora-style outlets that I'm using throughout the house. In the bedroom I will probably not bother, opting for only a small holeout of which runs a short segment of speaker wire directly to the speaker.

When a drywall seam becomes visible it is quite a lot of work to hide it correctly.

That said, it's totally doable in the usual 3x as much time as you expected.

So yes, I thought it would take an hour or two and it ended up taking a few hours on multiple evenings, but it looks... Sooooo Goooood!

My first project has been to replace the hideous almond/beige electrical outlets with the sleeker white ones.

This project made sense because the inspector made it clear that i needed to install GFCI outlets in the kitchen and baths. I agreed that this was a good idea, but I didn't want to buy almond-colored GFCI outlets only to replace them in some distant future with White ones.

So I jumped on the opportunity to make the house look a little sexier. I did an inventory of the situation and discovered that I needed:

First, the good news. As it turns out, every outlet in a bathroom does not need to be a 10$ GFCI outlet. A modern GFCI outlet like the 10$ ones I bough from Home Depot allow you to chain a whole string of Electrical Outlets off of a single GFCI switch... Sure, if you drop a hair-dreyer in the tub you need to search around the house to find the master GFCI switch to bring the circuit back to life, but it is perfectly safe. (The first outlet on my chain just so happened to be int he lower bathroom. From there it went to the master bathroom followed by the guest bathroom. For now, i'm just goign to have the one outlet int he guest bathroom protect the whole string of outlets... I don't own any electrical bathroom appliances anyhow.

Then, the bad news (for my wallet). Brendan pointed out that Home Depot sells some really sweet dimmer modules that work in multi-switch situations (replacing up to 8 outlets that would have otherwise been 3-way and 4-way switches.)

I decided that dimming was in fact critical for several of the zones in my house (to save power and to look less starkly lit.). As such, one of the 5$ 3-way switches would have to be replaced with a dimming 3-way switch such as this model by lutron. 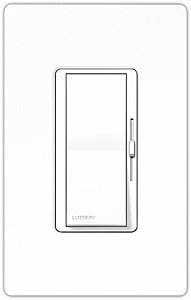 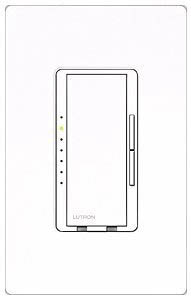 Left: Lutron's cheaper Diva 3-way dimmer. Right: The master unit of the Maestro Series. (The LED's indicate the current brightness and you can dim the lights from the remote locations too.)

At 40$ + 12$ + 5$, I decided to go hog wild and get the primo Lutron setup, the Maestro series. I got a 2-pack (master + remote) for 50$ at home depot and I cannabalized a second 2-pack to get the second remote. This solved the situation and the results were fantastic. The lights can be dimmed at any location, they remember your dimmer setting and they fade ever so smoothly on and off when you tap the light switch. Was it worth 200$ to replace three zones and an extra regular dimmer with these fancy switches? Maybe not for resale value, but I sure like them.

Sadly, the included info from Lutron fails to explain how to wire more than two switches. Fortunately, the directions are available online.

For an overview of the traditional 3-way and 4-way switch wiring try this article on electrical-online.com.

So, I've been really busy recently since I'm now a homeowner.

Roughly speaking, the home is ~1800sqft with 2 bedrooms, 2.5 bathrooms, a computer room and a large continuous living/dining/kitchen space. It's sitting on a tiny lot (30 x 100 ft) and feels alot like condo/townhouse living, but with nobody sharing a wall with me. I really like it in so many ways, but that's not to say it can't be better.

I'm going to try to document my various projects... Use this as a log of what I did to improve the place, what it cost me and how much better I like the place after the project was completed.
GhettoHardware News